HomeThe Parson Russell TerrierIntroduction of Puppy in the Family 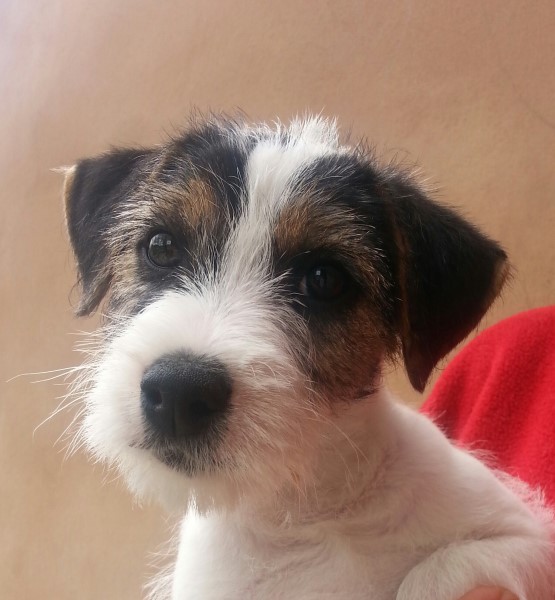 Native Sioux have no name for horse, but literally call it a ‘big dog’. In actual fact … “When the Sioux first saw the horse brought from overseas by Spanish conquistadors they had no idea what it was. But when they saw it move, when they saw how faithful it was, how it would stick to its rider, even as he lay dead, they could only associate these characteristics with those of the dog”. Jane Goodall, British ethologist and anthropologist..

Current scientific studies have proved that dogs react to experiences and feelings on the basis of what psychologists term emotive intelligence, meaning that aspect of intelligence linked to the capacity to recognise, evaluate and manage knowingly their own emotions and those of others. An awareness of one’s own emotions is a key element in reaching a fulfilling social life based on exchange and empathy in a relationship that may involve several subjects. When a dog enters a new home, whatever kind of family it may be, this experience is read in much the same way as a new puppy joining the pack where the subjects, responsible for this new ‘production of emotions’ are the members of the family, and thus members of the pack. In a pack (as in any social group an individual joins) the dog identifies the various members, reading and interpreting not only their emotions towards himself but also the emotional exchange among the various members of the family. Thus he is able to identify the leader, the second in command, his peers and those beneath him. To fail to recognise that animal psychology is unable to make these distinctions is to seriously underestimate “man’s best friend”. Dogs work through logical and consequential thought, albeit to a simpler extent than human beings, but as we shall see below their logic is much more practical and linear as they avoid or ignore the complex process of working out their own personal return, solipsistic and opportunistic, typical of the human mind, a pushy and scheming mechanism of hypocrisy orientated towards the pursuit of one’s own wellbeing, which each and every one of us, consciously and subconsciously, carries out on a daily basis. Dogs do not behave in the same way.

The dog is the pack, works with and on behalf of the pack. Once family roles have been identified (which may vary over time) the dog will behave according to the social structure, which for him represents a good part of his world. Each pack, each family is unique, and dogs can read and recognise this uniqueness. Though others may come and go in the family, the ‘pack’, they will never be recognised as an important part of the whole. Dogs will tend to respect the pack leader and depend on him (or her), for their basic needs, food, water and physical wellbeing. Once the puppy enters its new home, it will spend some time observing and attempting to understand its new world. It will soon learn how to read and interpret human emotions, how to recognise the various levels of stress, anger or joy in the voice of its owner. It will rapidly associate the private relationship it has with its owner to the mechanisms of reward and punishment.

The dog’s mind, however, cannot go beyond this. The family in the role of the modern pack represents a huge handicap to the dog, the lack of socialisation with others of the species. As with 23 human beings, socialisation is a factor of primary importance for dogs. A lack of socialisation as a puppy will produce an insecure adult, being at ease with human beings only rather than other dogs. The psychological aspects of the other members of the family are just as important to instil trust and create cohesion in the new family. The importance of sharing out affection, which a parent may practise within the family, paying particular attention to the ‘newcomer’, may be easily compared to the arrival of a new child in the family, with all the risks of how existing children may react. It is necessary, then, to introduce the dog within the family, identifying his affective role, emphasising his presence as an integral part of the family so that he may be viewed as a friend or ‘new brother or sister’ rather than as a new toy to provide a distraction from social or emotional issues within the family.

Such emotional disengagement may lead to problems associated with the presence of the dog such as allergies or even cognitive distortion arising from the inability to focus on even the most routine tasks, which become impossible to carry out and the blame inevitably falls upon the dog. It is no wonder that this may happen with the children in the home. Any importance given to the new arrival, whether it be dog or baby should not be a source of emotional or organisational breakdown. The new arrival should not stop the home from functioning regularly. It is important, then, to supply just the right dose of ‘emotional investment’ they deserve.

This does explain how important it is to neither under- or overestimate the arrival of a dog in the home. As with a newborn child (with obvious significant differences), a new puppy should not upset family life but neither should it be an answer to every problem nor the cause. It should gradually find its place, an innate need of the dog himself. It is often the families themselves that turn this event upside down instead of allowing it to take its natural course.

A dog should not and cannot become “the joy, the soul or the whole life” for a person, because that is not what we are for him. This view may provoke argument in that most people who own a dog often make it their life’s purpose almost, and when they talk about their four-legged friend their eyes mist over and the voice tremors. It’s true to say that the results of pet therapy are indisputable and the social improvements that a new dog may bring in situations of isolation have been extraordinary. We are not talking here about these extremely important results on a psychological level, though, but an excessive identification or emotional investment we put into the dog, which works against the successful integration into the home. It is crucial not to give more importance to the new arrival than it deserves, otherwise it is the dog who will become the leader, not because of his natural supremacy but simply because he will instinctively feel that he has a duty to lead the pack in the absence of a head. Once this delicate phase is over, feel free to indulge. A new dog in the family will soon become a star.

It is important to recognise that a dog may perform several functions because with a pet we can talk, let off steam, interact, play and learn, “hard to do with a teddy bear”. Interaction with an animal, with a family pet, can guarantee a calming effect: such interaction is free from rigid social rules and, especially, destructive feelings of competition. The loving relationship formed with the dog will be the same as the relationship that any sane person will form with their child, a relationship that may, at times, appear to be overshadowed but is rarely absent for long. The educational, pedagogical function linked to childhood will no doubt bring into play the subconscious memory of raising a child and allow us to relive a familiar experience. Furthermore, the dog will inevitably act as a stress ‘cushion’ for all the family. The emotional support that a dog can give is still an object of psychological, systemic- relational study, from the 24 reawakening of responsibility in a father, to providing company in old age and restoring the emotional balance in many serious cases involving children and adolescents.

Dog Therapy is currently widely used in the United States and Northern Europe. The emotional and relational potential that a puppy can bring to the family is enormous and diverse according to the type of family concerned. The spontaneous and natural communication skills of a dog make it a catalyst for social interaction, which can only serve to improve the balance in a metropolitan pack.

Kennel di sopravento comes from the passion for dogs of its promoter and owner Corrado de Rose ...
Read more

Email:This email address is being protected from spambots. You need JavaScript enabled to view it.
Corrado de Rose
Tel:338 1994094